Synopsis Amelie Poulain, a sheltered and inquisitive child, grows into an eccentric young woman who appreciates the smaller things in life. After she discovers a child’s lost treasure box behind a tile in her apartment, she sets off to find the owner, un-expectantly beginning a journey in helping the people she sees each-and-every Pierre Jeunet

Story by: Guillaume Laurent day while dealing with the misfortunes of her own life.

Growing up in regional Australia, I didn’t have a very multicultural childhood, especially when it came to non-American foreign films, so it’s a nice thought to think that Amelie still managed to become one of my favourite films.  I don’t watch it very often, so when I do go back to the film, it’s always a huge pleasure. Originally, I had thought that having to watch the film in French with English subtitles would be off-putting, but it adds to the experience, emphasizing that I’m delving into a life that is very unlike my own.

Character/Casting: I don’t have much to say due to my thoughts being quite positive. Audrey Tautou is positively charming, quite able to pull off portraying a character that never truly grew up due to her unconventional childhood. The rest of the cast all play their part in creating the off-kilter world Amelie immerses herself in beautifully. Even the characters who take up the least screen-time manage to grasp your attention.

The Plot: The film is a slice-of-life adventure with a hint of romance and a quirky and imaginative flair. It’s not too often that a story that consists of such small stakes can be so much fun. Amelie’s journey to a fulfilling and satisfying life while helping to enlighten the lives of others is a refreshing take on an old troupe. While romance in film generally bores me to tears, Amelie and Nino’s search for each other is endearing, as they are trying to meet in the middle of their chaotic lives, both knowing they need each other, but not quite sure how to get there. It is clear Jean-Pierre Jeunet was clearly having fun with bringing his unique story-telling technique to fruition.

Highlight: The narrator was clearly intended to be a character all on his own, having more of a presence then some of the on-screen characters. While providing exposition, the narrator embodies the spirit and mindset of Amelie herself, allowing the audience to capture her essence. Not to mention he has some of the best dialogue in the film, always cracking me up with very viewing.

Low-light: For once in my life, I can’t think of anything negative that truly stands out. The only problem I have while watching the film is the subtitles not quite matching what I suspect is being said, as it brings me out of the story. 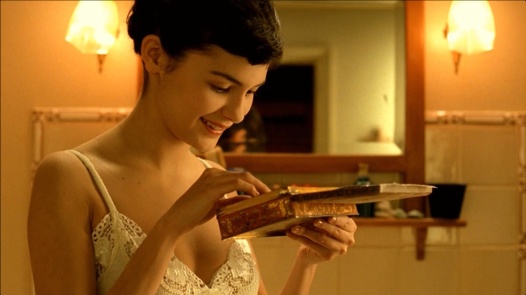